Today in the Arts

Another to-do for PaperClips215 last Thursday, including this, which I’m attending tonight. Also including a link to Ellie Brown’s indiegogo, at which she’s raising $7,000 to put her SoLow show on stage. Anyone who doesn’t get how even a low budget production costs a fortune will be interested to read what she has to say there. And to give a few bucks.

Also, an article for the latest incarnation of Art Attack, on how David Patrick Stearns is not putting forth competent work in his new job as staff theater critic.

A bit nervous about this one, because it’s the second time I’m criticizing a critic publicly. The first time, it spurred conflict with the critic I came out against. Poor Stearns is a classical music critic, why would they transfer him to theater? I’m mostly speaking against the ridiculously desperate tactics of the Inquirer. Thing is, they’re a respected news source; if they quarter-ass their theater coverage, people will still believe them. Air Bud could be their staff writer, and he’d still get hits.

PaperClips215 is a new portal for info on Philly’s creative culture. It looks like for now I’m their main theater guy, and am going to be publishing there once/wk, directing people to the best local shows. This is important, because many of these amazing shows are under-financed, under-publicized, and under the radar.

I’m focusing on experimental and cheap. The gems you otherwise won’t hear about. The pay-what-you-can weird shit you’ll brag to your friends about and they’ll moan about how they would see more theater if they knew it could do THAT. Like a choose-your-own-adventure dance in the basement of a power plant in Old City. Or devised theater cabaret about genocide. Or a play about crystal meth play performed in someone’s living room.

For me, it’s nice to have Paperclips turn up around the same time that Art Attack vanished. That venue has closed down, unfortunately. But writing for Phindie and Paperclips is so much fun because they’re all such scrappy chaps. Even if they don’t pay me.

Check out my first post for info on what to do with your weekend.

PS: Also, going along with the theme of new venues, a number of articles have popped up about the new FringeArts space – and more specifically, their $60 tickets. Most writers contribute to the moaning (which is valid enough) or remain neutral, but Amy Freeman has written a thought-provoking and fact-filled op-ed for the USA Herald. She even offers a solution, mad as that may sound.

PPS: Help me out. I want to represent the BEST and WEIRDEST of Philly’s underground experimental performance scene. If you hear about anything really awesome you think I might not catch wind of for any reason, let me know. I need to be in all the loops. There are so many loops in this city that just when you think you’re in the loop you find another smaller loop somewhere.

In this article I’m going to talk about three shows I’ve reviewed this week; Noir by GDP Productions, The Homosexuals as part of Quince Productions’ GayFest!, and Two Noble Kinsmen, a free Shakespeare production of The Philadelphia Shakespeare Theatre. I will also offer a series of images which show different ways in which one play—in this case, 2NK—could be designed, as alternatives to the relatively basic design of PST’s show.

A very exciting theater company (I’d like to say “new” but just unknown to me and, it seems, the internet), GDP Productions, put together a show called Noir, featuring five local playwrights offering homage to that genre. It wasn’t uniformly great . . . but it definitely offered something new. The company makes “quick, twisted, cool, cheap” theater. I got to do a brief review on phindie, and there’s an interview on Art Attack with the head honcho, and director of Noir, James Kiesel. I didn’t do the interview.

In the slightly more main-stage world, Quince Productions is presenting The Homosexuals, Philip Dawkins’ much-acclaimed comedy about relationships and American gay culture in the 2000’s, and The Philadelphia Shakespeare Theatre’s annual free production, Two Noble Kinsmen, is closing this weekend.

I wrote about one for Phindie and one for Art Attack already. Both plays are worth seeing for different reasons. Dawkins’ award-nominee play is certainly a modern masterwork, the kind of play which could be taught in the classroom (in thirty years’ time, of course) for plotting, character-design and structure. It’s pretty mainstream in all of these aspects. Thematically it is slightly blue, considering itself with homosexual relationships and showing a few raunchy same-sex encounters, and the relationships are portrayed so honestly and fairly that the play is easily relatable to a straight audience, even one not interested in gay culture – though of course this easy relatability between the two worlds is what makes the play truly powerful.

What strikes me about this play are A) the steady breakdown of the friend group and, with it, the dissolution of youthful naiveté (20-year-old Evan arrives in Chicago hoping to find a “family”; over the course of ten years he sleeps with most of the people in that family, and they all end up talking behind one-another’s backs; by 2010 he breaks up with the last of them), and B) the depiction of 20’s careering and carousing.

These days, with everyone wanting to have their own career – that’s right, women too – and with jobs being unreliable and unstable, the 20’s are spent drinking box wine in one-another’s living rooms, reading books or watching Netflix in your own house, and working jobs you aren’t particularly happy about.

The Homosexuals is honest about this. Evan has a job, but it is clear that he doesn’t feel at home there, and he never seems to become much of a professional. Tam quits her promising university career to follow the idealistic route of serving underprivileged kids in urban schools; she quickly loses that idealism. Peter directs fringe theater for a living, and is broke; only British Mark seems to have a good career and a solid paycheck. No one looks like much of an adult, nor, as Evan spends an entire decade trying to find himself, is there much of an idea of what an “adult” is.

Two Noble Kinsmen is worth seeing, if not only for the fact that it is at times very funny, also for the unusual choice of play (will you ever see Two Noble Kinsmen again? would you read it on your own?) and the inventive direction of Aaron Cromie.

That’s not to say that there are no good performances. There are great scenes here, like all of The Jailer’s Daughter’s monologues. More often, this play, as it is part of a teaching series, is more of a pleasure in that you see the artists in-process; these are not accomplished actors dancing through a masterwork, but recent theater initiates struggling with a bizarre text and its weird characters. There are delightful moments and interesting choices, daring ones which accomplished actors might not go for.

In summer 2012 at the Philadelphia Shakespeare Theatre Aaron Cromie directed Titus Andronicus, another rarely produced Shakespeare, though for different reasons. Two Noble Kinsmen is unpopular because there is little in it which isn’t done better in other Shakespeares. Titus productions are scant because it is so wildly violent that most companies don’t know what to do with it.

Cromie knew what to do with Titus; also an accomplished puppeteer and designer, he studied up on France’s Grand Guignol, crafted some incredible puppets, hired Natalia de la Torre as his costumer, and bought a shit-ton of fake blood to spray all over the audience. He also cut it down to an absurdly short length of two hours, pulled laughs out of the poetry like loose threading out of an H&M t-shirt, and only then dug into the emotional reality and sickening violence of Shakespeare’s swaggering first tragedy.

Two Noble Kinsmen felt like it could have done with a bit more cutting, and a more focused concept. Cromie shot for a straight-forward production here; an admirable shot at invigorating a not-great script yielded mediocre results. Most of his jokes play very well, and the production is worth going to for laughs alone. But the drama is not always such a hit; it is at times laughable itself, and at times simply drags.

Don’t Worry Philly, There Will Be Theater in August 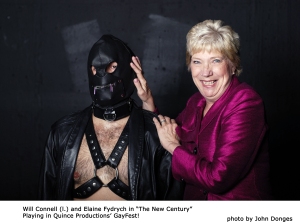 August is not the most auspicious of theater months. For most theaters, mainstream and small, the season is still a September or October to May session.

With FringeArts taking over September for the last decade and a half, many companies frame their first show around this. Some, like the Idiopathic Ridiculopathy Consortium and EgoPo take advantage of the fest, which this year runs Sept 4-22, to stage their first shows (The Castle and A Doll’s House, respectively) as part of it.

The Arden curtains their season directly after with Parade on Sept 26th, Philadelphia Theatre Company opens 4000 Miles well into October (apparently to celebrate my birthday on the 11th), Plays and Players and InterAct open even later.

The Walnut doesn’t seem to worry about the competition, running In the Heights from Sept 3. The Lantern is a bit more cautious, opening Emma toward the end of the fest at Sept 19th.

There is this concept that people go on vacation in August. Well, not in this economy, suggests Rich Rubin of Quince Productions, whose third annual GayFest! presents 18 widely varied shows throughout the month of August this year.

Read my preview of this interesting and growing festival here.

WELCOME TO MY METAPHORS

I'd rather have roses on my table than diamonds on my neck. - Emma Goldman

the hour of soft light...

How do I know what I think until I see what I say? (E.M. Forster)

An Irishman's blog about the English language.

The Life and Works of Marshall James Kavanaugh

An online dream exhibition of the living author.

When I utter sighs, in calling out to you...